Vladimir Feltsman plays the piano with a sure sense of will. He approaches the instrument without a moment’s hesitation and his fingers greet the keys as the contours of a known love. He reassures the audience with each passage that he is the arbiter of the night’s sounds. His interpretation is clear and clearly his own — born from thoughtful consideration and practice. 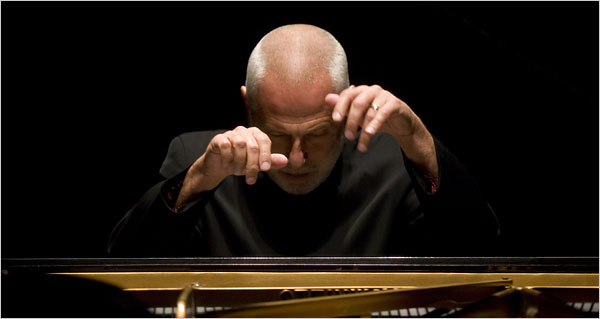 Feltsman performed an exquisite evening of piano favorites for a welcoming Civic Music Association audience in Des Moines on Friday night at Sheslow Auditorium on the Drake University campus. The program featuring Schumann’s Kinderszenen, Op. 15 and Faschingsswank aus Wien, Op. 26 before intermission and followed by Mussorgsky’s Pictures at an Exhibition, was a perfect vehicle to demonstrate Feltsman’s interpretive command.

The candor of Feltsman’s playing was captivating; particularly when he used it as a pretext to subvert the ear before the following phrase.The return of the Promenade theme in Pictures at an Exhibition was a glimpse through a kaleidoscope of interpretive nuance from the initial clarion declamation to the wistful Tranquillo. The straightforwardness was often a necessary easing from the onslaught of sound that he commanded from the keys. This program was rife with moments wherein he absolutely turned the piano out with sound. For example, The Great Gate of Kiev, the final moments of the Mussorgsky, was a glorious array of sound that gave the impression he had an entire festival orchestra under his fingertips. In fact, triumphant might be too soft of a descriptor in this case.

It is important to note that part of the brilliance in Feltsman’s playing is the realization that he eschews exact purity and over-refinement. This is not a question of his technique but rather lauding his ability to still capture that element of humanness in his playing. His phrasing never strays into the sterile, or conversely, into overt sentimentality. Feltsman brought this ability to fore in the two Schumann works and with his stirring encore, the Liszt Liebesträume No.3. Nothing in this program had the feeling of being slow. So, when he seemed to relax into the sound of a single chord it became even more satisfying to the ear of the audience. This was felt most in his poignant renderings of the Op. 15 Träumerei and Der Dichter spricht.

Vladimir Feltsman is commanding as a performer even when he elicits his most tranquil sounds from the piano. While I wouldn’t recount his playing as being gentle, his assured sense of sound and resonance of the instrument are nevertheless alluring. Which brings to mind: not every recital is the same. Not every musician playing the piano repertoire we, as audiences, love is the same. That isn’t always as clear as perhaps it should be; however, it is sublime when it is.